The common digital lighting control in Europe even worldwide spread is DALI (Digital Addressable Lighting Interface). DALI is specified by a series of technical standards in IEC 62386. Standards conformance ensures that equipment from different manufacturers will interoperate. Another approach is to utilize KNX lighting in building automation and is similar to DALI originate in Europe and operate by an organization in Brussels. Devices from different manufacturers can run smoothly because all products are subjected to be tested by third neutral test laboratory to ensure interoperability. Table 1 is the comparison chart between KNX and DALI in system level which indicates KNX outperforms DALI one.

The human eye does not perceive changes in light level in a linear manner and slight variations in perception occur between individuals. This response results in a difference between measured and perceived light levels shown in Figure 1. 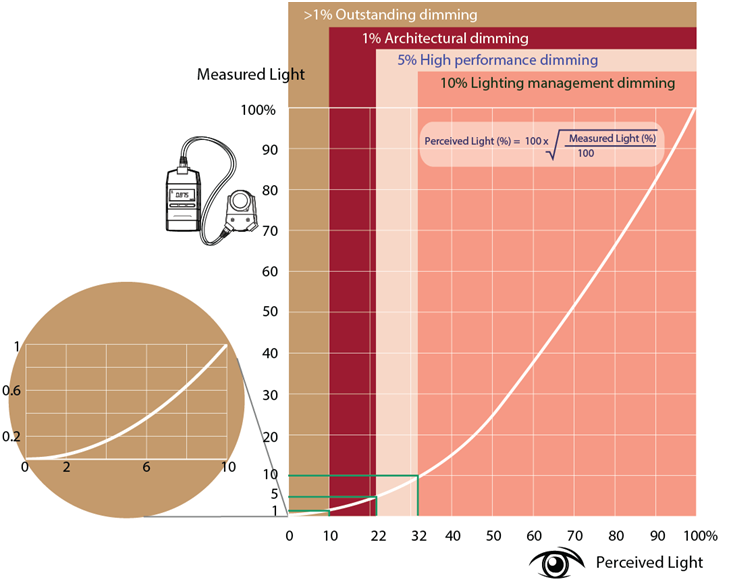 There are three dimming curves to choose: Linear, DALI and log as found in the ETS application database for MEAN WELL PWM KNX direct driver. Linear curve gives the output of driver same as command sent from push button. DALI curve is based on formula specified in DALI standard which gives the user outstanding dimming experience. It is because light difference between steps is designed to be constant and the minimal dimming level is 0.1% (equivalent to 3% perceived light) according to DALI standard. Log curve gives the logarithmic response. It is worth to mention that minimal output of log curve gives only 0.01% (equivalent to 1% perceived light) which opens the possibility for some applications where low luminescence is needed. User is free to select one of these three curves to achieve the best result. 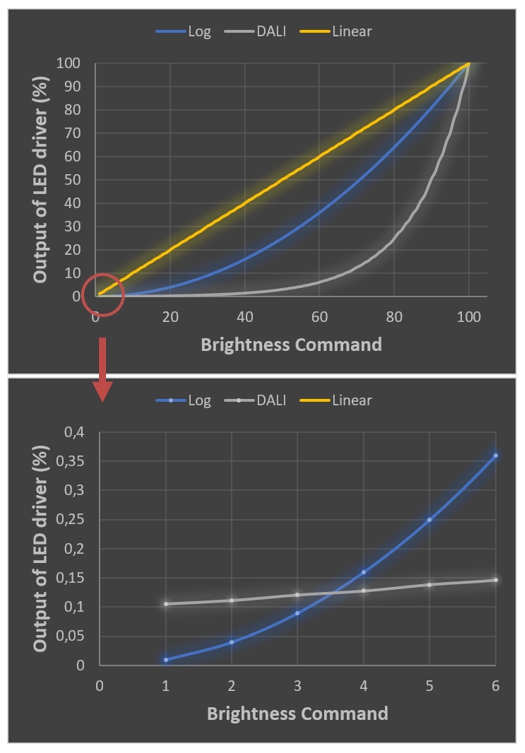 The deep dimming performance test carried out by using 24V LED strip is shown in Figure 3. It shows low light intensity is achieved by using Log curve from MEAN WELL PWM KNX driver resulting in a better result than driver based on DALI standard. The photos are captured by camera which does not have the nonlinear behavior like human eye. Hence, it shows even obviously different by visually check. It is suitable for some applications whereas it requires very low light intensity e.g. cinema.

The light change of constant voltage LED lamp is in general realized using PWM (Pulse width modulation) by adjusting the duty cycle of the current which results in changes to the average current. PWM is effective for accurate light dimming requirements handling high dimming ratios at higher frequency to avoid the light flicker and stroboscopic effect while maintain minimal effects to the LED colour temperature. Generic DALI LED driver has a fixed output frequency at several hundred hertz depending on design from manufacturers. Higher frequency design is preferred however it is compromised to maintain product reliability for the reason that more switching lost at the component inside driver is produced.  MEAN WELL PWM KNX driver has a unique design that the output frequency is user changeable between 200 Hz to 4000Hz. It avoids the frequency below 80 Hz for which visible flicker is detected by human man eye. Meanwhile PWM frequency at 4000Hz satisfies not only the IEEE 1789-2015 no risk requirement which set at 3000 Hz but also the SVM (stroboscopic visibility measure) for new Ecodesign which will effect from 1/Sep/2021 in European market. The formula of SVM gives the weighted spectrum summed up for all frequency components up to 2000Hz which means PWM at 4000Hz is far beyond the concern.

There are four way of applications for present here. First the LED strip as typical application, secondly is 12V a c traditional type lamp but using LED technology. There is also 24Vdc LED spot lamp available on market. Lastly it is possible to use additional dc to dc converter to drive constant current LED lamp. We will discuss the LED strip application first.
After ETS programming, the driver is placed to where the final location is and the LED strip is connected to the output of driver. Then KNX cable is connected for telegram commission followed by the connection to 230V a c mains voltage. When the driver received the command from push button or any other KNX input device, the light is controlled to turn on, off or dimming. 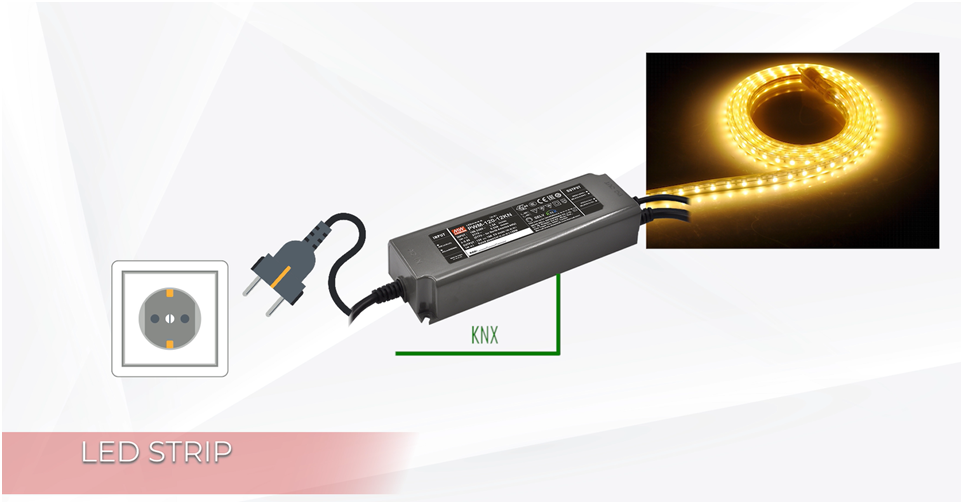 Second application is to drive 12Vac LED lamp for spot lighting. The benefits are including true replacement of low voltage halogen M R sixteen lamp which means even end user could replace the lamp without safety concern. one to one lamp size replacement. Long lifetime and it also provide dimmable options. The common lamp pin base is GU4, GU5.3, G4 and G53 which result a large and wide applications for it. The conventional way to drive these lamps in KNX system is to use a phase cut dimmer together with an electronic transformer. Such system is complicated and high cost. We would like to propose a new approach to drive these LED lamps using MEAN WELL PWM KN series.

As shown in the video, at the end of article, the connection is very simple. Even better is that multiple lamps can be added in parallel. Note that you should only program the driver only on and off function in case the non-dimmable lamps are used. The non-dimmable has a symbol shown on the package or described on the datasheet of lamp. For dimmable lamp, the driver can be programmed to perform on, off and dimming functions. The dimming range is also depending on the lamp type and user can adjust the driver to fit resulting the best performance by using ETS program.

Third application is to drive 24Vdc LED lamp for spot lighting as well. The benefits are similar to the 12Vac described previously on top of that the driving voltage is 24V which results smaller electrical lost along the cable. You can use 24V LED driver to realize on, off and dimming functions. Multiple lamps can be added in parallel as well. The demonstration shows in video a 60 watt driver for several 24V LED lamps in parallel. The minimal output of driver is set to 0.01% for some applications where low luminescence is needed. 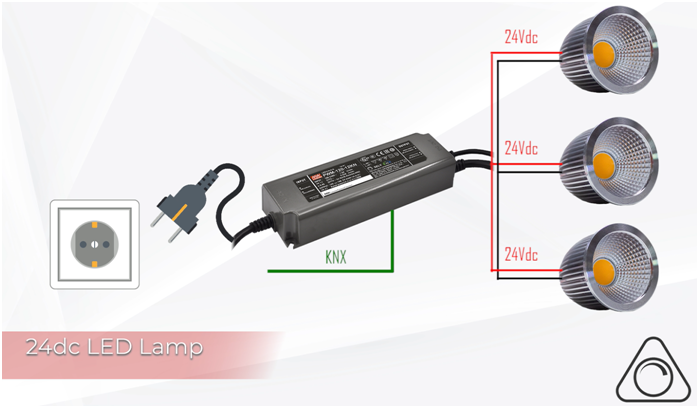 The last application is to drive constant current LED module or lamp for which an additional DC to DC converter between constant voltage driver and LED is needed. MEAN WELL provides LDD, LDB and LDH series for use depending on whether step-up or step-down mode is required. Multiple lamps also can be added in parallel. The demonstration in the video shows two constant LED panels are controlled via a 12V output 60 watt driver and two separate LDB converter to boost the voltage while maintain the output current to be constant.

This article describes KNX lighting system is better than DALI while there is much more you can do with a constant voltage KNX direct driver. MEAN WELL PWM KN series constant voltage driver is an optimized solution to not only avoid dealing with incompatibility between DALI gateway and driver but also provide much more functions to benefit the lighting system. Furthermore, the system is simplified without using transformer as used in traditional way which means the cost is reduced.